Three Gored By Bulls In Pamplona. You Get What You Deserve!

San Fermín Festival. Pamplona, Spain. Every year. For nine days these animals one after another suffers brutally and yet the cheering masses think this is great fun?

Prior to the Running of the Bulls, electric prods and sharp sticks are used to set the bulls into frenzy. The Bulls are bred in fields and are not accustomed to the noise of the crowd or being surrounded by people. They are then kept in crowded, dark enclosures, and when they are prodded onto the streets with electric shocks, struck by spears they are momentarily blinded by the sunlight. They are terrified and are hit by runners with sticks. The corners of the bulls’ route are quite sharp, and the animals often lose their footing and slide into walls, breaking bones and injuring themselves. All the bulls who slip and slide on the streets of Pamplona are running towards a bloody and horrific death in the bullring. There the torture continues…

I came across a site called Pamplona balconies where they even claim that the bulls usually don’t get hurt! That is just pure lies to get the tourists money. They say:

‘During the Bull Run (encierro) the bulls usually do not get hurt. They may bruise themselves if they slip and fall. In the evening then at 6 pm , the bulls are killed during the bullfights in the bullfight arena (Plaza de Toros). Particularly brave bulls may be pardoned by the audience and let to die a natural death but this rarely ever happens.’ 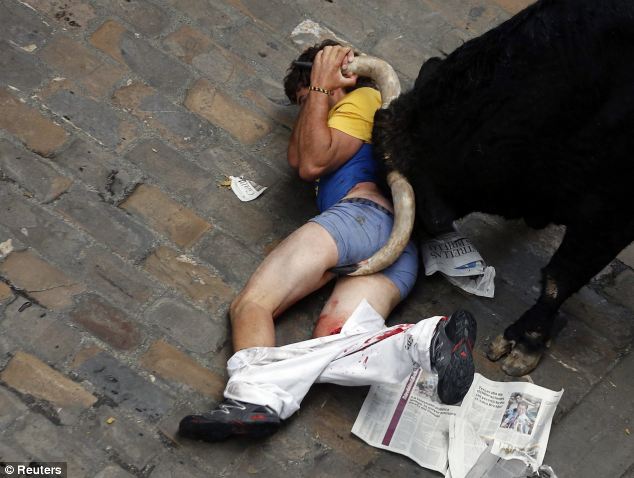 Anybody who participate in this animal torture, whether it is running with the bulls, standing on the side, cheering on from a balcony or even watch the bullfighting are nothing but disgusting. You are as worthless as rapists, murderers and paedophiles.

3 thoughts on “Three Gored By Bulls In Pamplona. You Get What You Deserve!”