A Life With Constant Pain For The Dancing Bears

The music plays. The bear stomps it’s feet and moves about.

People smiling, taking photos, throw some money to the ‘trainer’.

Take a step closer and look at the rope or chain that goes from the trainers hand up through the nose or are fastened in the nostrils with a big iron ring. Imagine the pain that shoots through the bears body every time it gets pulled.

The bears are poached from the wild as cubs and mostly it involves killing the mother who wants nothing more than defend her baby. Ripped away from the mothers love and safety, the cubs that survives are sold to a trainer who start the long painful road for a cub who just recently ran around in freedom, knowing nothing of the pain that awaits.

The trainer jam a hot poker or piece of metal through the snout or lip to make a permanent hole through which a rope is anchored to control the bear. This is being done without any anaesthesia at all. The trainer also break or knock out the cubs teeth’s so it wont be able to bite. The claw’s are either pulled out or clipped short. They get beaten with sticks to teach the cub to stand and move its hind legs. And to make it move as the trainer want he pulls the rope which cause great pain. 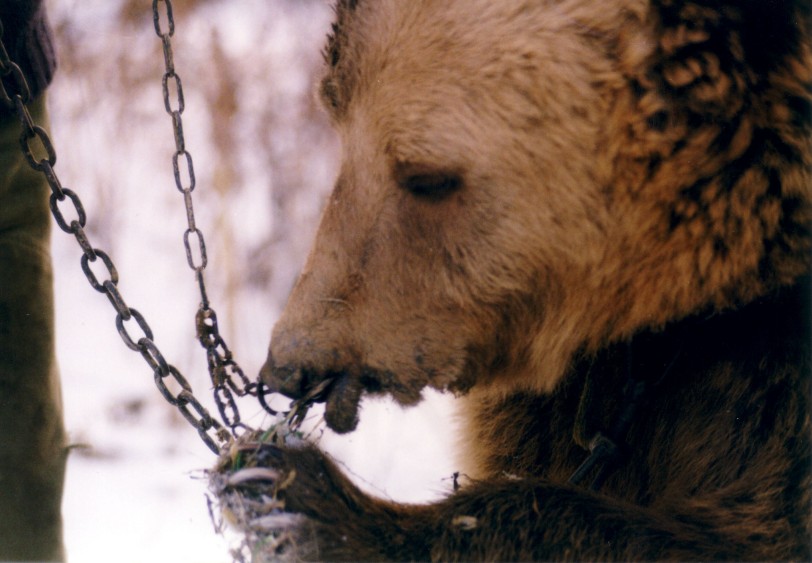 To make the bear dance they force the young cubs up on hot plates above burning logs. To avoid the pain the cub lifts it’s feet’s over and over while music is being played. This is to make the bear associate music with the torture, so every time they ‘perform’ the bear does what the public think is dancing when the truth is that it remembers the horrible burning pain… This goes on for weeks or months until the bear perform as the owner wants.

With a diet that consists of mainly (if any) of sugar, alcohol and bread they travel from town to town with their owner who often is so poor that they can hardly feed their own family. These bears are severely malnourished and can go blind and suffer other complications associated to that.

Whilst huge progress has been made towards decimating dancing bears from the world the practice continues in a number of countries. Siberia, Pakistan and Nepal are countries that still with high probability use dancing bears. In Bulgaria reports are indicating that the last bear was saved in 2007. Serbia in Russia had the last dancing bears saved in 2012, but there are too few reports coming out, so no one really know how many there is left. In Spain there have been no reports since 2007. In India it’s Illegal but the poaching and use of bears for street entertainment continues although in much smaller scale thanks to numerous animal organisations hard work.

We need to stop this, people who find this ”entertaining” need to know what they are supporting. The bear that is widely used as dancing bears are the sloth bear, a bear that is at risk of extinction due to hunting and smaller habitats. One thing that is unique with this termite eating bear is that the mother carry her babies on her back, which other bears don’t. This ”entertainment” from the middle ages should have stayed there.