Mary, the Elephant that got Hanged. 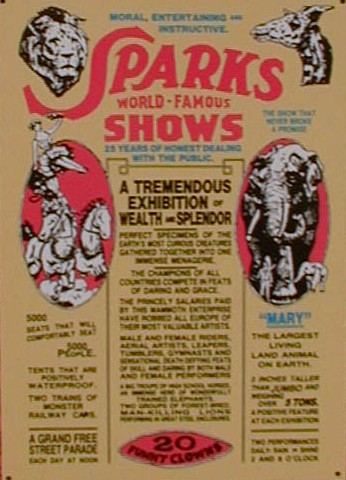 Mary was an Asian elephant born in 1894 although it is unclear where. She was bought 1896 by Charlie Sparks, owner of ‘Spark’s World Famous Show’ where she became a performer and described as “Mary, the largest living land animal on Earth; 3 inches taller than Jumbo and weighing over 5 tons. A positive feature at each exhibition.”

Moving from a horse and wagon circus to one that travelled by railroad by the year 1916, the circus had five elephants and used fifteen rail cars to move from town to town. In early September of 1916, a hobo by the name of Walter “Red” Eldridge was hired as an assistant elephant trainer for the elephants while the show was in St. Paul, Minnesota. After the circus left St. Paul, it travelled to Kingsport, Tennessee, where it opened on September the 12th.

Between performances, the five elephants were driven to a watering hole. On one occasion, while on the way back to the tent, Mary saw a piece of watermelon beside the road and broke ranks. Witnesses say that Red Eldridge took a bull hook and jabbed Mary’s ear, and she became enraged probably due to an infected tooth. The witnesses say that Mary grabbed Eldridge with her trunk, threw him against a drink stand, then stepped on his head – completely crushing his skull.

Just after the accident there are several different accounts what happened, most indicate that she calmed down, but that the onlookers began to chant for her death “Kill the elephant! Let’s kill it.” And soon a local blacksmith Hench Cox fired his pistol five times at Mary, and later Sheriff Gallahan tried with his .45, according to witness Bud Jones, but with little effect.

At midnight Charlie Sparks made the decision that she had to be killed in public as he saw no other choice. The only question was as to how. Shooting proved ineffective and also poisoning since Elephants have some half a million sense receptors in their trunks and can easily detect noxious substances. Some advocated crushing Mary slowly between two opposing railway engines. Others called for her head to be tied to one locomotive and her legs to another so that she would be dismembered alive as they set off in opposite directions. It was also suggested that she would be electrocuted as Topsy had been in 1904 by Thomas Edison (see here). In the end it was decided that Mary should be hanged.

The next day, a foggy and rainy September 13, 1916, Mary was transported by rail to Erwin, Tennessee, where a crowd of over 2500 people gathered at Clinchfield Railyards, to watch Mary die.

The chain from which Mary hung snapped shortly after she was raised off the ground, and she fell down on the hard ground, immobilised and in severe pain since the hipbones broke when she landed. Meanwhile, one of the circus hands ran up her back  and attached a stronger chain.

The winch was powered up again and this time Mary was raised high in the air, her thick legs thrashing and her agonised shrieks and grunts audible even over the laughter and cheers of those watching below. It took about ten minutes before Mary was dead, but they left her hanging for a half-hour, witnesses say, and then, pronounced dead by a local physician, Dr. R.E. Stack, they dumped her in the grave they had dug with a steam shovel 400 feet up the tracks.

That night the circus went ahead as usual, but after the show one of the remaining four elephants broke away from the herd and began running towards the railway yard.

Since wild elephants are thought to return to the bones of fallen family members for many years, he perhaps went in search of Mary. But he was quickly recaptured and returned to the life of captive misery from which he had escaped.

Knowing that Mary no longer had to endure this cruel and unnatural existence is perhaps the only consolation to be drawn from this awful tale of poor Mary.

2 thoughts on “Mary, the Elephant that got Hanged.”