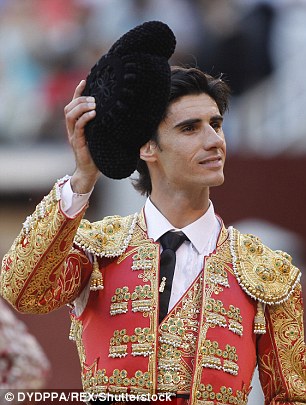 Spanish bull murderer Victor Barrio has been rightfully killed by a bull called Lorenzo. It happened during a tournament in Teruel in Aragon, Eastern Spain and was screened live on television. The poor bull had been struggling but managed to catch the murderer off guard, snagged him in the side, rammed him to the ground and gored him the chest.

Personally I think the bull did the world a favour to get rid of a vicious clown who think it is brave to torture animals. What is wrong with people who find this ”sport” entertaining? Who thinks that being dressed in an ridiculous costume while torturing a animal can be counted as entertainment? Vile and sick people that’s who they are. A country like Spain who allows this cruel thing to go on is frankly sick, barbaric and stuck in the stone age. Time to catch up now, to evolve, time to end this horrible cruelty.

Anyone who defend bullfighting is a sick individual who have no place in a modern society. I will never have sympathy for people like Barrio and I hope he suffered worse than what he put the poor bulls through.

And lastly I just want to add that the Spanish guy who died during Running of the bulls in Alicante in Spain had it coming just as the sick freak Barrio.

3 thoughts on “Spanish Matador is Killed by Bull. Proper Justice!”