That Angora Sweater Is Made With Horrifying Pain, Just For YOU.

Christmas is coming up and people flock to the stores for gifts to loved ones and maybe yourself. Or maybe you are out to find a warm hat, scarf or a new pair of gloves for the cold weather?

Maybe you are, (just like I was) unaware of what these Angora rabbits go through in their short life? Maybe you didn’t either know the cruelty involved? I found out and will share what I now know.

Ninety percent of angora fur comes from China, where there are no penalties for the abuse of animals on farms and no standards to regulate the treatment of the animals. When you buy a sweater, hat, or other product that contains angora, the angora fur most likely originated in China, even if the finished product was assembled elsewhere. Rabbits are extremely clean by nature and in these farms they are kept in tiny, filthy cages, in their own waste and painful bleeding ulcers in their sensitive paws because of the cage wires.

When it’s time for them to get their fur cut, they are tied up under severe pain and stress. Often those who owns the farms simply rip out the fur from the tied up rabbit who screams in pain. Bleeding and crying and with no chance to flee…

It’s not any better from those rabbits that gets cut with sharp tools. Often they end up with bleeding wounds after they try to escape, that gets infected by by the filth they are surrounded with.

After this terrifying and barbaric ordeal, which the rabbits endure every three months, many of them go into severe shock. After two to five years, those who have survived are hung upside down, their throats are slit, and their carcasses are sold to markets and restaurants. Many farmers kill male angoras at birth because they yield less wool than the females.

PETA released a undercover video of angora farms in China, and please watch. The screams from the rabbits will follow me for a very long time…

THAT is the life for these beautiful creatures. THAT is how they suffer just for people to have a ‘fancy’ sweater or expensive hat or scarf…

I will NEVER wear Angora, will you? 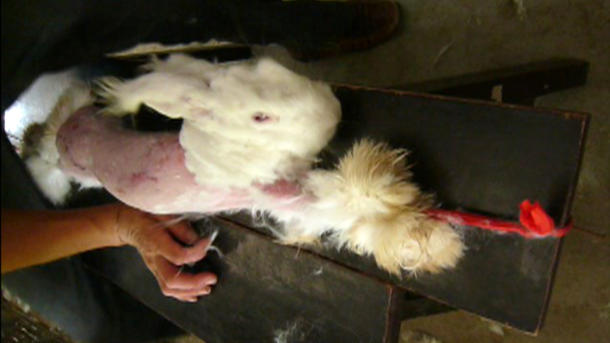 A place to find out more and advice what to avoid:  Cruelty free shopping

26 thoughts on “That Angora Sweater Is Made With Horrifying Pain, Just For YOU.”