Animal Cruelty For ‘Fun’ In Spain…

At least 40,000 bulls are  killed each year at bullfighting events in Spain. Thankfully several cities are banning bullfighting but it is not enough. EVERY city and town need to ban this barbaric cruelty, this torture of innocent animals.

‘Running of the Bulls’ in Irunea/Pamplona is a week long event in mid July where the big event is a 825 meters ‘race’ that brings thousands of spectators every year for the ‘fun’ and ‘exiting’ run in front of charging bulls and also the daily bullfights.

How do they get the Bulls to race? Prior to the Running of the Bulls, electric prods and sharp sticks are used to rile the bulls into frenzy. The Bulls are bred in fields and are not accustomed to the noise of the crowd or being surrounded by people. They are kept in crowded, dark enclosures, and when they are prodded onto the streets with electric shocks, they are momentarily blinded by the sunlight. They are terrified and are hit by runners with rolled up newspapers. The corners of the bulls’ route are quite sharp, and the animals often lose their footing and slide into walls, breaking bones and injuring themselves. All the bulls who slip and slide on the streets of Pamplona are running towards a bloody and horrific death in the bullring.

It is 2013 and you would think that people would be smarter and stop this so-called ‘sport’. That you can’t blame it as a tradition and therefore totally legitimate to torture animals.

Did you know that before a bullfight the Bulls are intentionally debilitated by various means, such as having sandbags dropped on their backs? That drugging is also very common. A study conducted by scientists at Spain’s Salamanca University found that 20 per cent of the bulls used for fighting are drugged before they step into the ring. In a sampling of 200 bulls, one in five had been given anti-inflammatory drugs, which mask injuries that could sap animals’ strength? That another common practice is to ‘shave’ bulls’ horns by sawing off a few inches. Bulls’ horns, like cats’ whiskers, help the animals navigate, so a sudden change impairs their coordination. Shaving is illegal, so the horns are sometimes inspected by a veterinarian after a fight. In 1997, the Confederation of Bullfighting Professionals – which includes Spain’s 230 Matadors – went on strike in opposition to these veterinary inspections. 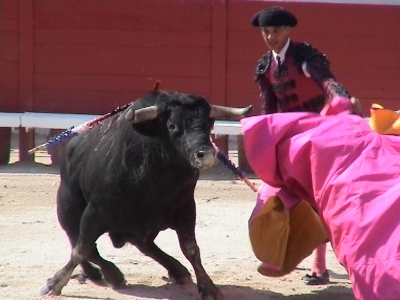 These people who are involved in this cruelty, everyone from the spectators to the matador and the farmer who breeds these bulls are nothing more than ugly pathetic non humans.

How can they look into an animals eyes and not see their soul, the kindness that are in their eyes? They have feelings, they feel pain just as we humans do. And I bet that most of those involved in bullfighting or bull-runnings have pets at home? They come home to their cat or dog and treat them like a family member. So how can they find it fun and right to see or be a part of animal cruelty?

2 thoughts on “Animal Cruelty For ‘Fun’ In Spain…”