Remember Tyke The Elephant And Her Painful Death? Ban ALL #Circus Animals!

Tyke was a female Elephant born 1974 and died August 20, 1994 after being shoot by the police 86 times. It took nearly 2 hours for her to die there on the street in terrible pain, lonely and afraid… 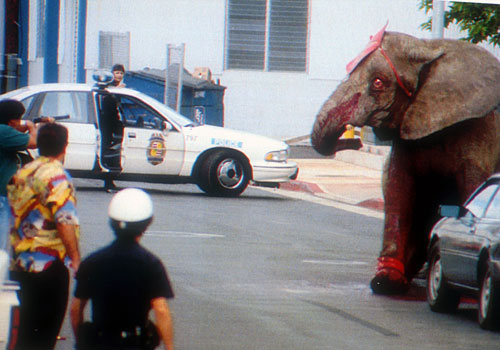 Tyke was trapped and taken away from her family when she was a baby. She was shipped to the circus. There, she was confined to a concrete room and beaten over and over, to break her spirit. Circus trainers hit her repeatedly with a sharp metal “bullhook,” which made her cry out in pain. They struck her in her most sensitive areas: behind her ears, on top of her toes, in back of her knees, and around her anus. They wanted to hurt her and frighten her so she would be obedient.

She spent most of her time in chains, doing nothing. Her bones ached from no exercise. Her diet was monotonous. She stood in filth and excrement. She was deprived of every aspect of normal elephant life.

The day she died she was as usual performing for Hawthorne circus which have a long record of animal cruelty violations. In 1988, according to USDA (United States Department of Agriculture) documents, Tyke was beaten in public to the point where she was “screaming and bending down on three legs to avoid being hit.” The trainer said he was “disciplining” her…

By April of 1993, she had enough. She tried to escape during a circus performance. She didn’t make it. In July she tried to escape again; she was unsuccessful. Hawthorn should have retired her right then and there, as she was an obvious threat to the public. But they didn’t. Only God knows what punishment she received when brought back to the Circus.

For the next year she performed in the circus and lived in a barren concrete barn, chained, between shows. The bullhook beatings continued. She vacillated between terror and boredom.

In August of 1994 Tyke reached a breaking point. She had been in the circus nearly 20 years. She was tired of being beaten, whipped, and kicked. She could no longer take the pain and the confinement. She was angry and wanted to be free. At an afternoon performance at the Neal Blaidsell Center in Honolulu, it all came to a head.

At some point during the show, she veered from the script. Circus staff tried to beat her back, but no bullhook or whip could stop the rage that had been building inside her for two decades. She crushed her trainer, Allen Campbell. She attacked two other people. She panicked the crowd. She ran into the streets. It was rush hour. She was disoriented and no idea where she was. She charged at bystanders and smashed cars as she made her way through several city blocks. Onlookers screamed. The police were called out and started shooting at Tyke with rifles.

She slowly fell over, then awkwardly stood back up. The police kept firing. Her head swayed, and her legs buckled. She got up again. The spray of bullets continued. She rocked her head violently from side to side. Her legs gave way once more. She was on her knees and could not right herself. Her eyes were fully open and confused. The shooting went on for several more seconds. Finally, she fell, very slowly, onto her side.

This was Tyke’s final performance. The price of freedom from the circus was steep. She was shot 87 times…

Hawthorn Corporation has a long record of animal abuse, starting in 1978 and continuing through the years all the way to October 2012. And I am sure we will hear more from them too. You can read here what they have done to animals.

25 thoughts on “Remember Tyke The Elephant And Her Painful Death? Ban ALL #Circus Animals!”