Organ Harvesting From Prisoners In China, And The Link To Sydney University

”The University of Sydney Medical School supports Huang’s commitment to reform of the Chinese transplantation system and his continued association with the University as one of its honorary professors.”

”Huang Jiefu is recognised internationally for having made significant changes to the regulation of China’s organ transplantation processes in an effort to curb the practice of organ retrieval from executed prisoners.”

”Huang was appointed an honorary professor in 2008 in recognition of his significant achievements in improving the Chinese health system and his ongoing involvement with the University of Sydney.”

Those are words from a statement made by Professor Bruce Robinson, Dean of the University of Sydney Medical School. Here

In 2005 Huang Jiefu was involved in an transplant of a liver. He contacted the Third Military Medical University in Chongqing, which is affiliated with the Chinese military, as well as the Zhongshan School of Medicine, to obtain a blood-matched liver. Within about 24 hours, one arrived and he performed the transplant. http://www.webcitation.org/6GG5RhWXH 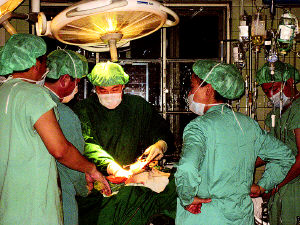 This is also what Mr. Robinson wrote in the statement made by the University:

”He has been an outspoken critic of organ retrieval from executed prisoners since 2005.”

Huang Jiefu has publicly stated that executed prisoners are not an appropriate source of organs. However, Maria Fiatarone Singh, a member of the faculty of health science at the University of Sydney, regards Huang as one of the former leaders of an unethical system of organ transplantation.

“In the 1990’s a very special form of lethal injection called slow lethal injection was perfected in China by Chinese officials,” she said to the ABC, which produces the 7:30 Report. (See below)

”This was meant to preserve the organs while the person is anaesthetised. They don’t die right away, giving the surgeon time to pull out organs before the lethal injection is finalized. “It’s done in a way that actually allows this very, very unsavoury mix of execution and medical care and treatment to be done by the same team of doctors,” Singh said. It’s likely that Huang has himself extracted the vital organs of executed prisoners, says Singh. Singh says that even up until November of last year Huang was still carrying out liver transplants. “That would be 100 organs a year,” Singh says. “Using his own figures, 90 to 95 percent of those would have come from executed prisoners.”

Huang previously gave estimates that 90 or 95 percent of all organ transplants in China were from executed prisoners.

So Sydney University do not see anything wrong with Huang being an honorary professor.

They also stopped Dalai Lama from lecture there at first so what can we expect next from them?

4 thoughts on “Organ Harvesting From Prisoners In China, And The Link To Sydney University”