Chinese Authorities Pay Cash For Information. How Many False Accusations? 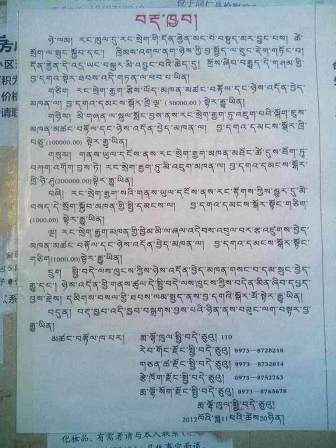 Above is a notice both in Tibetan and Chinese that announce cash rewards for those “exposing crimes” related to the ongoing wave of self-immolations and issue an ultimatum warning to those who have “committed fault” to turn themselves in before November 30 in lure of lesser punishment.

The authorities have warned that those who are caught under these crimes after the given deadline will be dealt severely according to the law.

In recent weeks, authorities have engineered a heavy security clampdown in the region, arresting several Tibetans from Rebkong and Tsekhog in connection with the self-immolation protests.

Along with the ultimatum, Chinese authorities have employed its age-old policy of sowing distrust in the society by announcing heavy monetary rewards for information on self-immolators and those who “incite” such protests.

The authorities further promised to protect the identity of the informants and called the self-immolation protests a “bad influence” on social harmony and stability, not just of the region but also of the entire nation.

Wonder how many Chinese citizens accuse anyone just for some money? How many who get thrown into jail after false claims?

The whole article can be found at:  Phayul